The Cosmic Evolution Survey (COSMOS) is an astronomical survey designed to probe the formation and evolution of galaxies as a function of both cosmic time (redshift) and the local galaxy environment. The survey covers a 2 square degree equatorial field with spectroscopy and X-ray to radio imaging by most of the major space-based telescopes and a number of large ground based telescopes. Over 2 million galaxies are detected, spanning 75% of the age of the Universe. COSMOS is led by Caitlin Casey, Jeyhan Kartaltepe, and Vernesa Smolcic and involves more than 200 scientists in a dozen countries. More information on the COSMOS team members can be found here. 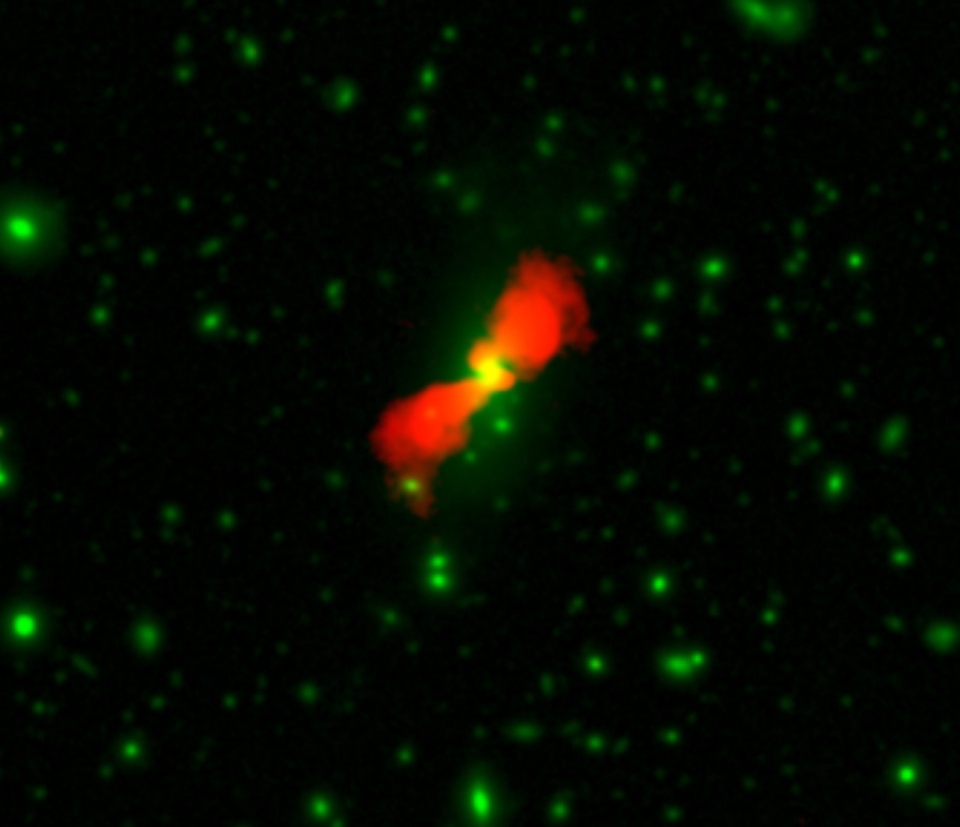 Imagine your eyes could see in the radio part of the electromagnetic spectrum and you went out and looked towards the constellation of Sextans, where the COSMOS field is located. You would be able to distinguish several weird shapes in the sky showing jets or lobes of radio emission, forming snakes, slugs, and butterflies. These extended radio Active Galactic Nuclei (AGN) have the nickname FR-type radio galaxies.

The latest work by Vardoulaki et al. (https://arxiv.org/abs/2009.10721) of FR-type radio AGN in COSMOS uses the data from the 3 GHz VLA-COSMOS survey (Smolčić et al. 2017) to investigate the physical properties of the sources, their host galaxies and the large scale environment in order to find links with the shapes they display in the radio sky.

What's the relation between the mass of galaxies and their rate for star formation? The new paper by Sarah Leslie and collaborators measures this relation for 200,000 galaxies in the COSMOS field.

This relation between rate of star formation (SFR) and mass is called the main-sequence. It is observed across a large amount of cosmic time (redshifts). The paper by Leslie et al. provides a coherent measurement of this main-sequence up to redshift of 5 (about 13 billion years in the past). To do this, they use mean stacks of 3 GHz radio-continuum images to derive average SFRs for ∼ 200,000 mass-selected galaxies.

Check out her YouTube video explaining her paper: https://www.youtube.com/watch?v=tMNp4qXp0FM 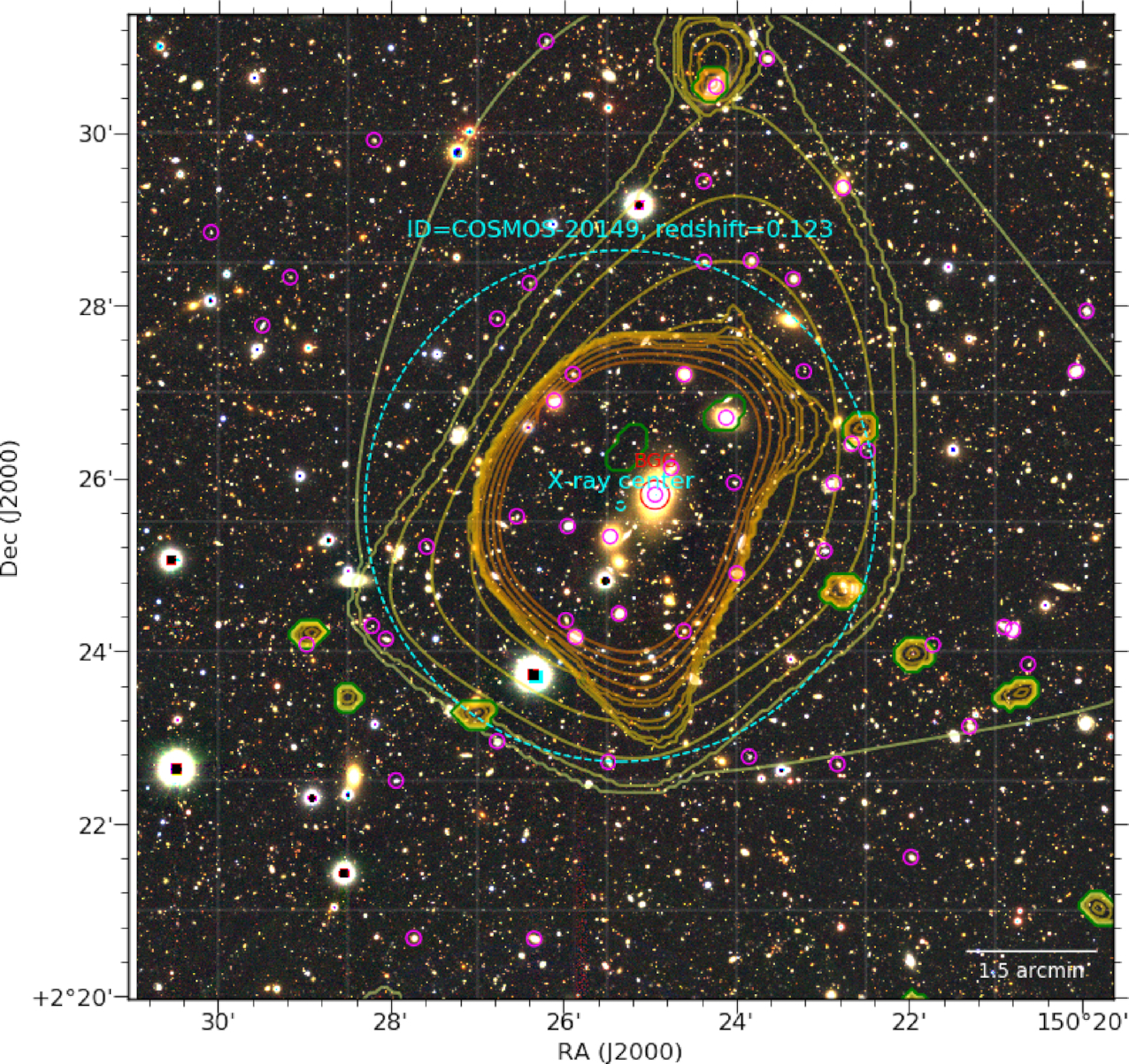 In the latest contribution to this project, Dr. Gozaliasl and his collaborators provide a catalog of X-ray selected groups and clusters based on XMM and deep Chandra observations which offer an unprecedented spatial resolution in X-ray. 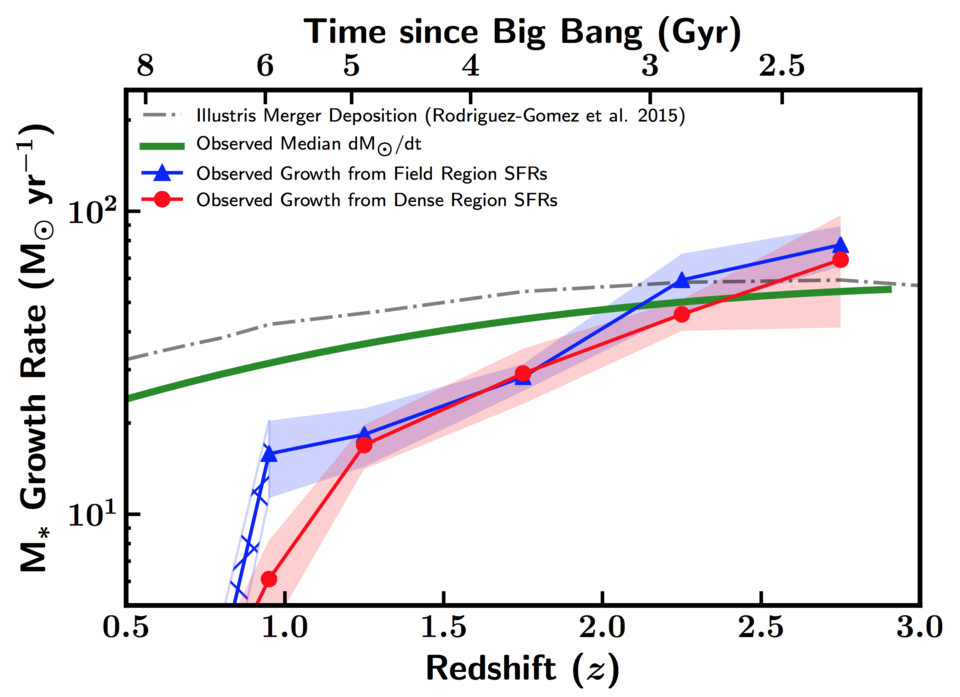 The brightest and most massive galaxies in the universe, the Brightest Cluster Galaxies (BCGs), tell a unique story of galaxy evolution. Today, BCGs are quiescent ellipticals hosted in relaxed galaxy clusters, with pasts fraught with mergers and high star formation rates (SFRs).

In a recent publication, Cooke et al. investigate how this active past may depend on local environment by estimating star formation in BCG progenitors in the COSMOS field out to a redshift of z ~ 3 (more than 11 billion years in the past). To estimate star formation rates, they fit progenitor observations with various models from the far-ultraviolet to far-infrared wavelengths. They find that BCG progenitors gain stellar mass in three phases, with effects due to local environment manifesting at z < 1.25 (9 billion years in the past).

The image shows the stellar mass growth of of galaxies in the field (meaning isolated) in blue and dense environments (meaning in clusters) in red.

For more information, check out the full paper!

Looking deep with the Hyper Suprime-Cam

The HSC on the 8-meter Subaru telescope in Hawaii also covers the COSMOS field. The increased depth in the g, r, i, z, and Y-band in DR2 is crucial for the study of the first galaxies in our universe. But it doesn't stop there - also galaxies that cease their star-formation can be studied in detail with these data.

The image shows a comparison of the previous Suprime-Cam data (right) vs. HSC DR2 data(left) in I-band on a small field of COSMOS. Note the much deeper imaging of HSC DR2 (also compare the insets).

COSMOS Survey
@cosmosastro
RT @Jeyhan: My PhD student, Ekta Shah's, first paper is out today! A lot of work and careful analysis on data from @cosmosastro and @CANDEL…

COSMOS Survey
@cosmosastro
Join us for the COSMOS special session on Tuesday at 2PM at #AAS235! 353. Fifteen Years of COSMOS: Exploring the Ra… https://t.co/Pfd7lElpoj