COSMOS researcher Caitlin Casey has found that the formation of the most massive structures in the Universe — clusters of galaxies — happened with a bang!  This conclusion was reached after looking in detail at galaxy protoclusters - collections of galaxies in the early Universe that may eventually form a galaxy cluster.  It turns out the protoclusters often contain upwards of ten extremely rare galaxies with huge amounts of star-formation or having nuclear activity. Such objects are so rare that we would only expect 1-3 at most.  Since we see ten, or even more, per protocluster, it tells us that their extreme star-formation and nuclear activity is triggered together, in unison, in an area ~33 million light years across.  It’s as if a bunch of fireworks were all set off at once, across some of the largest expanses of space ever measured.  This may be the first observational evidence of rapid inflow of gas from the cosmic web into cosmic nodes (see bottom left image).  As filaments collapse and funnel gas in towards cluster centers, it ignites a heavy episode of starbursts on very large scales. Read more about the study here.

The COSMOS field is an essential piece of this study, as two of the five protoclusters studied sit in the field.  COSMOS is particularly useful for this type of study due to the large patch of sky it covers, allowing us to find such enormous structures.  Remarkably, these protoclusters appear a half degree across on the sky, the same size as the moon, despite being some of the most distant structures in the Universe (see image on right).

We’re embarking on a series of studies to find out what happens next. Are the extreme galaxies in these structures very short-lived or are they fuelled by gas along intergalactic filaments? Stay tuned to find out! 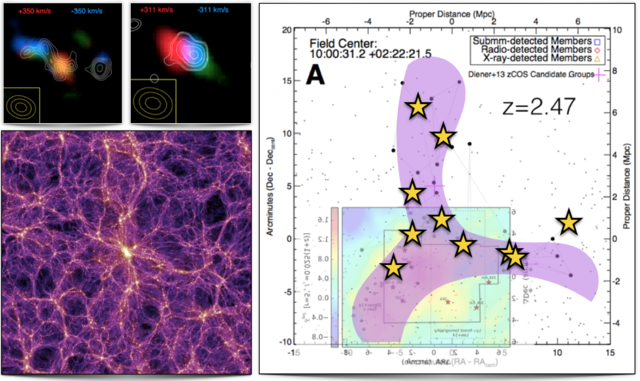