Researchers have found that 'starburst' galaxies in the Universe 9 billion years ago were more efficient at forming stars than average galaxies today.

'Starburst' galaxies display unusually huge bursts of newly-formed stars and are likely caused by a collision between two large galaxies. A new study published in Astrophysical Journal letters on October 15, led by John Silverman at the Kavli Institute for the Physics and Mathematics of the Universe, has helped to understand exactly why such huge bursts of star formation occur. The researchers used the new, sensitive Atacama Large Millimeter Array (ALMA) in Chile to study carbon monoxide (CO) gas in seven starburst galaxies that existed when the Universe was only four billion years old. They found that the amount of CO gas in these galaxies is not special, but that these galaxies seem to be particularly efficient at turning their gas into stars. This study also relied on a variety of powerful telescopes available through the COSMOS survey, including the Spitzer Observatory, the Herschel Observatory and the Subaru Telescope. Read the press release here.

This UV image from Hubble shows the result of two massive galaxies colliding. The blue contours show data from ALMA and reveal where bursts of star formation are occuring within dust clouds. 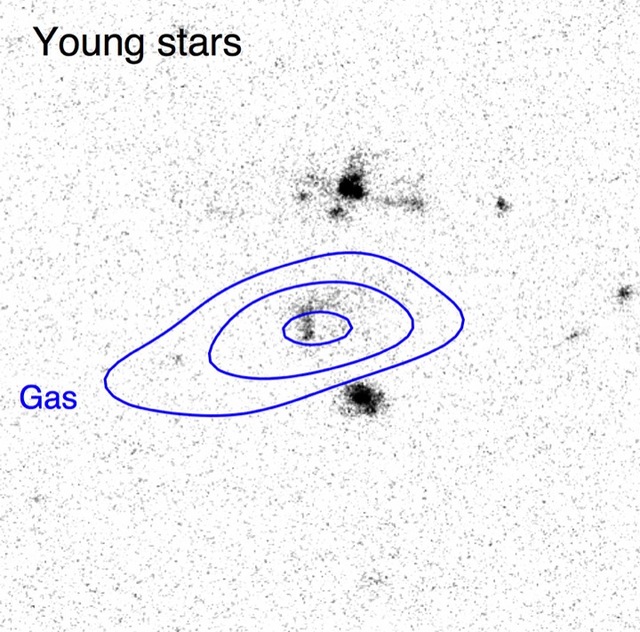