ALMA to set its sights on COSMOS

Several hours of highly competitive Atacama Large Millimeter Array (ALMA) Cycle 4 time has been awarded to COSMOS astronomers to target various objects in the COSMOS field. ALMA is a revolutionary millimetre/sub-millimeter telescope and COSMOS astronomers will use it to gain a deeper understanding of how galaxies formed and evolved. They will study how the galaxy environment impacts star formation, examine the sizes and structures of enigmatic sub-millimetre galaxies, explore the gas and dust content of galaxies, reveal the properties of galaxies in the high redshift Universe, and more. The successful proposals are listed below. Congratulations to everyone involved! 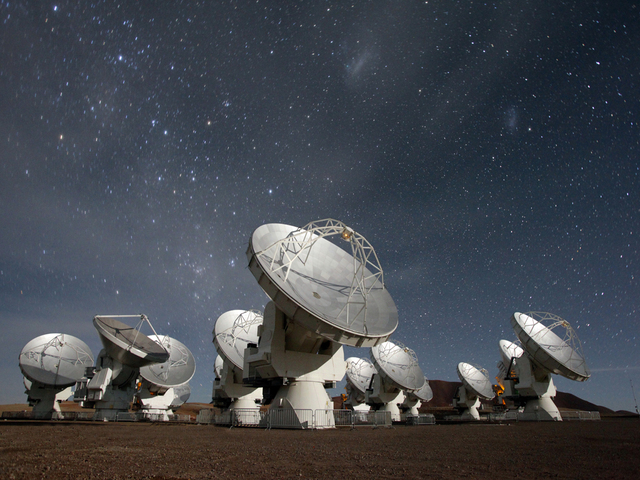 The project will conduct high resolution continuum imaging of a unique sample of 41 submillimetre galaxies (SMGs) in COSMOS. The primary science drivers of this project are to determine the intrinsic dust emission size scale of SMGs, study the multiplicity of SMGs on subarcsec scales, and search for gravitationally interacting SMG pairs.

Do galaxies in massive overdense environments grow more efficiently than those in the field?  Or do they just have a higher probability of colliding?  This program will measure the gas content of normal galaxies living in an abnormal neighborhood, that of a galaxy cluster in formation.  This gas content measurement will help tell us how environment affects galaxy growth when the Universe was only 2-3 billion years old, one of the fundamental science goals of the COSMOS survey.

We will observe the CO[2-1] transition in a sample of 75 well studied, IR-selected galaxies in the distant Universe, including both objects with normal SFR and enhanced SFR (for their stellar masses). This low-J CO transition will provide information on their cold/molecular gas content. Coupled to existing ALMA measurements of a higher-J transition CO[5-4] we will individually estimate their CO excitation (CO[5-4]/CO[2-1] flux ratio), a measurement of gas density and temperature distribution. Correlating to physical properties in the sample we will investigate which parameters mostly affect the nature of the interstellar medium in the distant Universe.

Remarkable progress has been made in understanding the formation of the first galaxies (within one billion years of the Big Bang), including integrated properties such as stellar and gas mass, star formation rates, and metallicities. However, their dynamics are still not constrained. Our observations will yield the first true dynamical characterization of normal star forming galaxies in the early universe.

A relation between the neutral gas and star formation rate surface densities (a.k.a the Kennicutt-Schmidt relation) is in the spotlight of galaxy evolution research. We propose to overcome biases involved in studying this relation via spatially resolved monochromatic band-7 observations of 60 mass-selected star forming galaxies in the COSMOS field with predetermined star forming sizes. This unique sample will allow ALMA to accurately constrain the Kennicutt-Schmidt relation close to the peak of the cosmic star formation rate density.

This program will map the distribution of molecular gas in 14 high redshift, starburst galaxies with a range of galaxy morphologies. These observations will help constrain the physical extent of star formation, probe the kinematics of the gas in these galaxies, and investigate the role of mergers for these extreme star forming galaxies.

Recent observations in COSMOS have discovered galaxies that appear to be so massive at redshift 5-6 that they are difficult to reconcile with the predictions of hierarchical merging.  The largest observational uncertainties in these analyses lie in the possibility of catastrophic errors in photometric redshift determination, particularly because a z<2 Balmer break may easily be confused with a z~5-6 Lyman break.  We will use [CII] to conclusively determine the redshift to five of the best-measured galaxies with high photometric redshifts and stellar masses, allowing a definitive determination of whether these galaxies are indeed impossibly massive within the hierarchical merging paradigm.

A coherent census of the gas content of galaxies through cosmic times ("cold gas history of the universe") is still elusive. The recent CO Luminosity Density at High Redshift (COLDz) survey  with the VLA (PI:Riechers) targeted the ground-state CO 1-0 line and is free of excitation bias. These new ALMA observations will enable us to investigate the CO excitation properties of this unique, CO 1-0 selected sample, covering a significant range in gas and stellar masses and star formation rates - allowing us to place them into context with other known high-z galaxy populations.

Cosmological simulations predict the existence of massive protoclusters of intensely star-forming galaxies at high redshift. We have identified such a unique region within ~1 billion years of the Big Bang in the COSMOS field. These new ALMA observations will allow us to image and model the morphology and dynamical structure of the gas and dust in a "normal" star-forming protocluster member galaxy at z=5.3 down to individual star-forming clumps on 500pc scales. This will critically constrain the dynamical origin of star formation activity in normal z>5 galaxies, and the extreme properties of starburst nuclei at such early epochs.