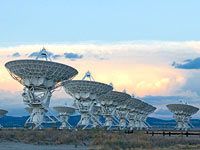 The COSMOS field has been observed at radio wavelengths at 20 cm (1.4 GHz), 50 cm (610 MHz), and 90 cm (320 MHz) with the Very Large Array (VLA), Very Long Baseline Array (VLBA)  and the Giant Metrewave Radio Telescope (GMRT). An HI survey (CHILES) has also been conducted within a subset of the COSMOS field using the VLA and has a companion ultra-deep continuum polarization component. Furthermore, COLDz covers a ~10 sq. arcmin field down to ~1 μJy rms at 35 GHz with the (J)VLA. A summary of all continuum survey parameters can be found in the table at the bottom of the page.

Deep Karl G. Jansky VLA observations covering the entire 2 square degree COSMOS field at 10 cm (3 GHz) down to an rms of 2 μJy/beam, uniform across the field, have been completed in 2014 (PI: Smolcic). These observations - constraining the deepest radio levels ever over a large field with superb multi-wavelength coverage - will open a range of new exploration windows in observational cosmology, and serve as the basis for next generation radio facilities, such as the SKA. More information can be found here. See also the press release describing the survey and first series of publications.

The 610 MHz GMRT-COSMOS (Kloeckner et al., in prep) and the 320 MHz VLA-COSMOS surveys (Smolcic et al., 2014) cover the full 2 square degrees, however at a shallower depth compared to the 20 cm map (see below for details).

VLBA observations targeting ~3,000 VLA-COSMOS sources at milliarcsecond resolution at 1.4 GHz are underway (PI: Middelberg). These will reveal the incidence and impact of radio-emitting AGN, and the changes in black hole accretion modes as a function of cosmic time.

CHILES (PI: J van Gorkom) is a survey to constrain the role neutral hydrogen plays in both driving and regulating star formation over cosmic time.  Carried out with the VLA in B array and covering a redshift range from z=0 to z=0.45, this single 40'x40' pointing is centered at 10:01:24.0 +2:21:00.0 within the COSMOS field. CHILES will produce HI images of at least 300 galaxies spread over the entire redshift range, covering a range of galaxy types and environments.  We observe 15x2048 channels of 31 kHz each with a sensitivity of 50 μJy, which givers a velocity resolution  after Hanning smoothing of 62 kHz, or 6.6 km/s. Our angular resolution of 5 arcsec corresponds to spatial resolution of 350 pc at z=0 and 42 kpc at z=0.45, and with 1000 hours of integration we will detect galaxies with HI mass of 3 x 1010 Msun at our highest redshift.

CHILES Con Pol (PI: C Hales) is an ultra-deep full polarization continuum survey at 1-2 GHz being performed commensally with CHILES (see details above). The survey will reach an SKA-era sensitivity of 500 nJy per 5 arcsecond beam at the field center, rising to double this at the 15 arcminute primary beam radius. The key science aims of CHILES Con Pol are to investigate intergalactic magnetic fields, galaxy evolution, and the transient radio sky. CHILES Con Pol will be sensitive to star formation rates of 10 Msun per year out to z=2, and to ultra-luminous infrared galaxies and sub-millimeter galaxies out to z=8 and beyond. At these unprecedented sensitivities, CHILES Con Pol will open a new regime for radio band studies, extending beyond the usual radio quasar and radio galaxy populations and opening access to the starforming and radio-quiet AGN populations that form the bulk of extragalactic sources detected in the optical, X-ray, and infrared bands. The CHILES Con Pol source catalog will comprise approximately 4000 sources. This will be a useful resource for automating radio source classification in much larger surveys with the SKA and its pathfinders.

COLDz (PI: D Riechers) is a survey in COSMOS and GOODS-N carried out with the Karl G. Jansky Very Large Array (VLA) in 2013-2016, with the principal goal to constrain the CO luminosity function, and thus, the "Cold Gas History of the Universe", at redshifts ~2-3 and ~5-6. The COSMOS portion of the survey covers a ~10 arcmin2 (~6.5 arcmin2 to uniform depth; approximately the size of the Hubble Deep Field) region in a 7-pointing mosaic, scanning the 31-39 GHz frequency range at ~17 km/s velocity resolution to blindly detect redshifted CO emission. The 140 hr mosaic, observed at ~3'' angular resolution, reaches an rms continuum sensitivity of
~1.3 μJy/beam. A smaller, selected sub-field will be observed at an angular resolution of 0.7", down to ~2 times lower rms noise. The first public data release is anticipated for late 2015.